The concept of Emerald Owl Productions, Inc. was formed by students at Cedar Creek Middle School in Youngsville, North Carolina who wanted to know how they could help in the days just after 9/11/2001. The students had three ideas that all proved to be true:
​
1) Students need more fun, safe, interactive experiences to keep out of trouble.
2)  If students are provided a meaningful way to get involved and feel they matter, they will respond.
3) These experiences create positive memories, teach valuable lessons, and can be fantastic fundraisers.

These ideas led to the creation of a Dance Marathon at Cedar Creek, which stemmed from the Penn State University THON, the largest student-run charity event in the world!   Since the Penn State Dance Marathon began in 1973, dance marathons have started at universities, high schools, and middle schools throughout the country. The Dance Marathon model is results oriented, an opportunity to give back, and fun.  From our nation's largest tragedy was born adolescents wanting to make a positive difference, give back to others, and find purpose in their own lives.

Over a span of 13 years, middle school students raised $151,199.72 PROFIT for various charities. Students and staff learned that an event can be more fulfilling than selling products. Emerald Owl Productions was founded in 2015 to replicate the success of the Dance Marathon and to keep the vision of the youth alive by sharing the gift of service and memories via epic events to others.

MISSION
Our mission is to help our partners build connections with their customers by creating life long memories through epic events.

VISION
Our vision is to create unique, interactive, and memorable experiences that unite people of all ages and backgrounds. If we focus on giving participants the best experience possible, our partner's fundraising goals will take care of themselves.

GOALS
* Create positive memories for our partners and their participants
* Create a superior experience that is interactive, family friendly, and fun for all ages.
* Help organizations raise money by building a self sustaining event -- We do this by adding incredible value to events, which leads to increased future participation profits

ARRIVING AT A NAME

While Emerald Owl Productions was not created until 2015, the process began a year earlier. Founder Michael Meyer began taking business classes at Coastal Carolina Community College in Jacksonville, NC and Carteret Community College in Morehead City. The Small Business Center at the school provided him a business counselor to assist in turning this vision  into reality. Emerald Owl Productions was certainly not the first name we initially had for the business.

Headquarted in Emerald Isle, a coastal town in North Carolina, and wanting to sound a bit mysterious, the first proposed name for the company was "Ocean Phantom Productions."  The idea of a logo with a ghost like figurine over a vast ocean with a spooky lighthouse felt intriguing and interesting. Our graphic designer was told to design a logo that somehow includes the image of the only lighthouse in Carteret County, Cape Lookout, and in some kind of imposing way, perhaps looking up at it at night. Our designer found the logo of Kennywood Park's (West Mifflin, PA) steel roller coaster, "The Phantom's Revenge", and the logo of "Phantom Fireworks" for ideas on how to somehow make a phantom emerge from the light of the beacon.
Other logos with phantoms (Kennywood Park's The Phantom's Revenge and Phantom Fireworks) were used for ideas as to how to incorporate some sort of phantom image into the lighthouse at night.
As work on the logo progressed, Michael's wife, Rheta, suggested steering away from the spooky image of a phantom because it might be too scary for young kids at parties. The newly created board agreed and decided instead of a phantom, the mascot needs to be a cute animal.

Always being cat people, Mike & Rheta thought the idea of a cool cat on the beach would be fun and appealing to the masses. An initial idea of a logo of a surfing cat was created by our designer. However, our business coach made a point the local public bus transportation is called C-CATS -- Carteret County Area Transportation Systems. "You might start getting a lot of calls for the bus schedule, " the coach said. The coach also pointed out that Sea Cat might give the perception that we only serve the local area, near the sea, and not able to travel. It was with disappointment that the idea of the surfing cat could not move forward.

Back to the drawing board and googling different ideas, Mike came across an amazing image, a beautiful owl flying at night with lightning in the background. The vision of a powerful white owl coming out of the lighthouse beam instead of a phantom could definitely go somewhere.  Instead of Ocean Phantom, we could be Ocean Owl Productions! Mike and Rheta thought they finally had their name! The mascot could even be named after a family dog, Ollie --- Ollie the Owl.

Hating to be the bearer of bad news again, the business coach pointed that there is a town in North Carolina by the name of Ocean Isle. Unfortunately, the town is south of Wilmington and over 2 hours away. The similarity of the name to something else, just like Sea Cat but in this case a town, might confuse people as to where the company is located. "You would not want people to think you are located somewhere that is nearly 3 hours away," said the business coach. Feeling defeated, they did not realize that an obvious solution was right in front of them until a few days later. 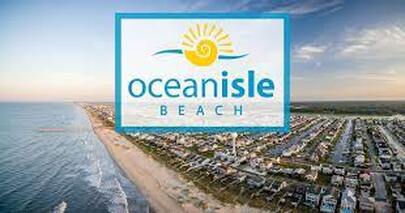 It dawned on Mike that while Ocean Owl Productions was out, the company would be headquartered in the only other  town in North Carolina ending in Isle.....Emerald Isle.....so what if the owl just went from white to emerald green? Going back to the business coach again, the name "Emerald Owl Productions" was suggested. It is a fun play on words, locals would get it, and even if outsiders did not, there would be no risk of confusion of where the company is based or where it could travel. People unfamiliar with the area would just see a cute green owl. The quest to find a name was finally over. On January 2015, Emerald Owl Productions was born! Instead of Ollie, the mascot would be Emmy....Emmy the Owl! 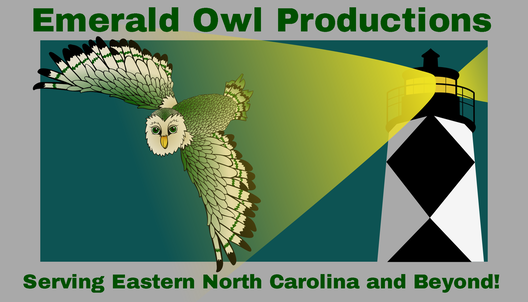 The first logo --- it incorporated the initial idea of using Cape Lookout Lighthouse, and instead of a phantom, there is Emmy the Owl, in flight, in the light of the beacon.
Emmy the Owl
The next step was to finalize the details of Emmy and how she would look. Now knowing the mascot was determined, our designer went back to work and researching how to best create Emmy.
Emmy the Owl, now in color, becomes a reality.
The next step was to create a mascot costume -- how can we turn the image of an owl into a costume to be worn by a human? We contracted Hogtown Mascots in Toronto, Ontario to help us with this next step. 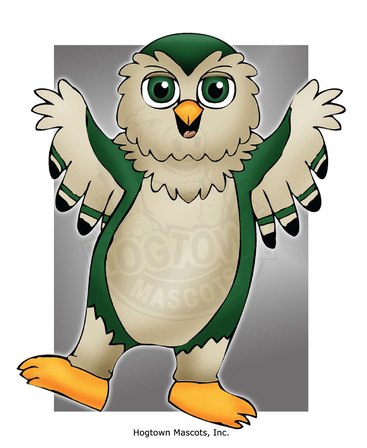 Unlike the name, we loved the design, made one minor change, and about one month later, Emmy the Owl born and arrived in Emerald Isle from Toronto. 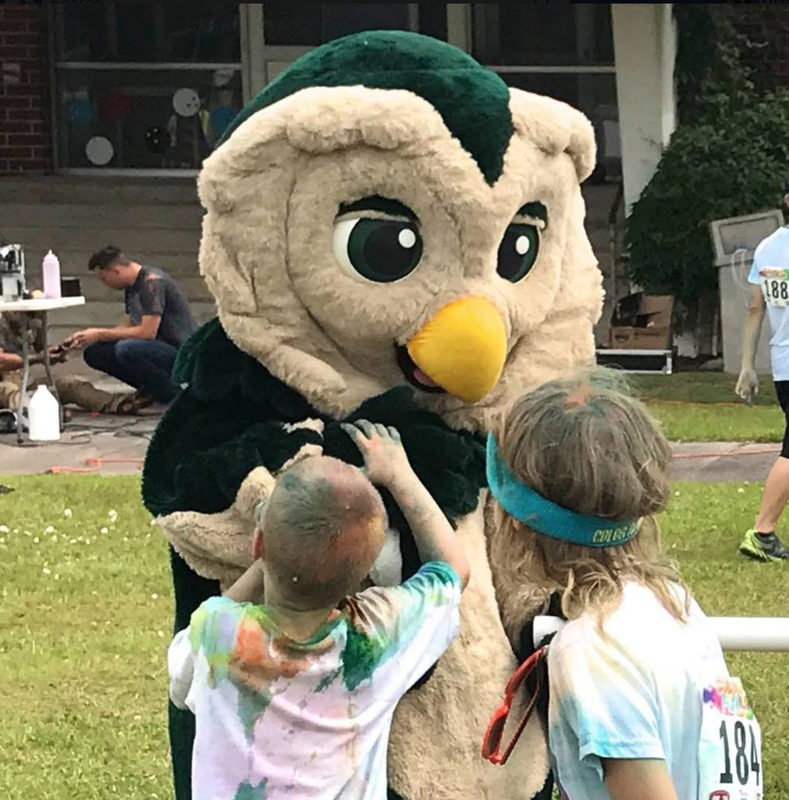 Emmy the Owl makes one of her first appearances to the public at a color run.